Following the 2013 floods, we worked with the Bundaberg community on how to reduce flood risk to the people of Bundaberg, their homes, businesses and the local economy. 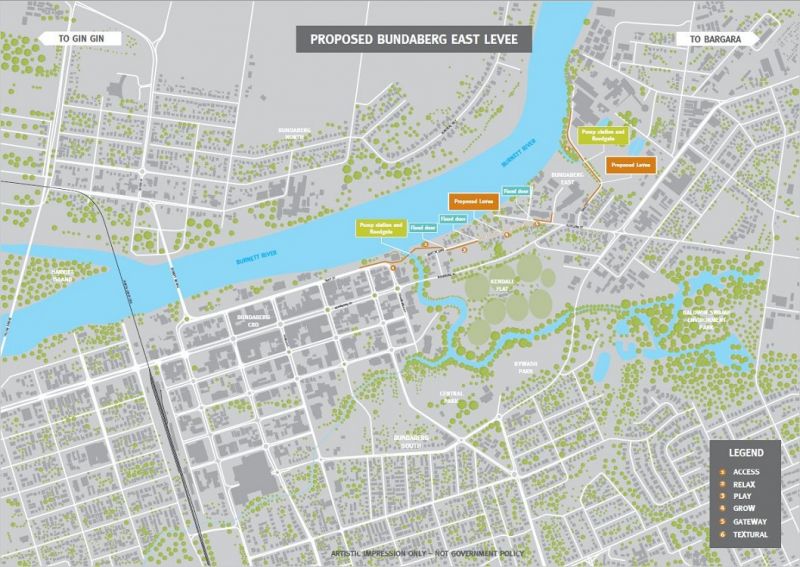 Map showing the proposed levee alignment - not to scale

We consulted with the Bundaberg community after flooding caused by ex-Tropical Cyclone Oswald caused damage to almost 3000 properties, 600 businesses, and made 7000 people evacuate.

By consulting with the community, we learnt from those who lived through and rebuilt after a flood event. We held community information sessions throughout 2018 to get feedback on what projects and potential improvements could work for the whole community. This information was included in our Bundaberg Action Plan.

About the Bundaberg Flood Levee

The Bundaberg Flood Levee project involves building a concrete levee wall with two main parts covering about 1.7 kilometres, flood gates at key outflow points with pump stations, and a community open space next to the levee.

The project is expected to reduce the risk and impact of flood events and mitigate flooding for over 600 buildings.

The key benefits are:

The Bundaberg Action Plan recognises and responds to changing needs and flood risk conditions following its launch in 2017.

The plan is based on options from a Flood Mitigation Options Assessment Report developed by an independent consultant based on community feedback and technical studies.

After further extensive community consultation in 2018, four options were chosen by the community and experts to future flood-proof affected residents and businesses.

Community consultation on the four proposed projects in the BAP

Funding of $1.1 million was announced for the first phase of the Upper Floodplain Evacuation Improvements project.

The Queensland Government committed half the funding to construct the Bundaberg Flood Levee and commenced engagement with the Commonwealth Government to secure a co-funding commitment. This activity is ongoing.

We will continue working with you

It takes a long time to come to a decision on projects of the scale and complexity proposed in this plan because they involve local, state and federal governments. The priority project in 2022 is the Bundaberg Flood Levee, which requires co-funding from the Australian Government.